Calculator of server power input: Try it and save money

At Coolhousing we go by the motto ‚ÄúPay adequately and only for what you really make use of‚Äù. It is because we have already been operating a system of intelligent sockets at our data centre for a long time already. Thanks to these sockets our customers only pay for the electricity that their servers actually consume. A frequent problem with this policy, however, is that server owners do not have an idea of what the real consumption of their server actually is.


In order to give server owners a more detailed idea of the calculation of real power input, we have developed a special application thanks to which you will get an idea of the server‚Äôs power input. The calculation of real power input is very complex and many factors ‚Äì from the efficiency of the source used that can still be ascertained from the technical specification of the source to the utilisation of individual components of the server ‚Äì play a role in it, for which the administrator would usually need a crystal ball.


We have made our calculator much simpler. After you fill in the necessary data our application will calculate for you an estimated real power input of the configuration entered.

The calculated value is only approximate, real power input can be different!


It is necessary to emphasise that the given value is only indicative. The reality after the deployment of the server may differ; nevertheless, based on our many years º experience in metering the power input of servers and investigating the effect of individual components on the power input, we have managed to make a very accurate power-input calculator. Assess it yourselves: 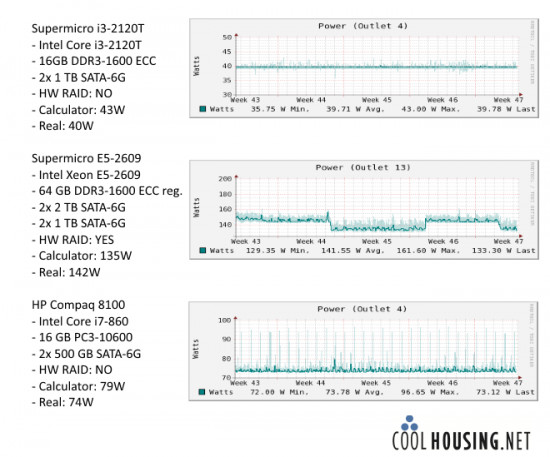 Of course, there are exceptions where results diverge... 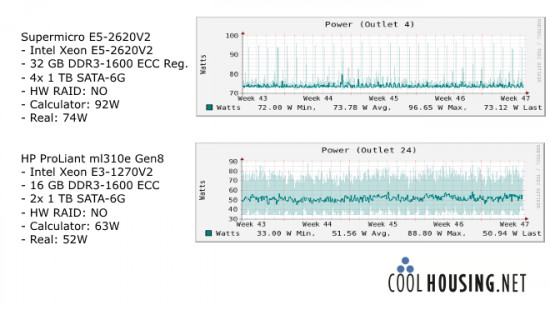 Although our calculator is not and cannot be 100% accurate, one thing is guaranteed: In reality, the power input of your server is not such as stated by the manufacturer on the plate of the source. The most frequent value of actual power input lies somewhere around 10% of the data on the plate.


Do you know the feeling when you have brought a new server to a data centre for hosting, which you know will not use up more electricity per year than a light bulb in a company broom closet, yet the DC operator includes into the same power input category as an electric convector heater? This will not happen to you at Coolhousing!